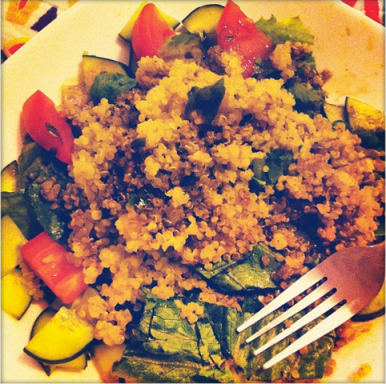 Miami University senior Sarah Tomashot started eating quinoa because she heard it was a great source of protein. Plus, it is easy to prepare and to find at most supermarkets – both huge things for any college student.

“I usually make a quinoa black bean mix and serve it with chips or pita,” explains Tomashot, a Spanish and Music double major.

Though quinoa is a decidedly an international food, dishes including it are rapidly increasing – including in Miami dining halls. The grain-like crop grown for the edible seeds has long been a staple for the communities in the Andes Mountains of South America.

The United Nations designated 2013 as the International Year of Quinoa – a sign of the food’s promise for malnourished populations worldwide.

Miami is marking that with an Oct. 16 lecture from Peruvian geographer Ricardo Bohl Pazos – who studies global economic and social issues of the sustainability of quinoa.

Oh, and there will be food! Tastings of quinoa dishes will follow the 5 p.m. talk in the Shriver Multipurpose rooms.

Bohl Pazos will talk about the sustainable aspects of quinoa, and the changing geography of producing it.

In the last 10 years, quinoa has rapidly grown in popularity in the global market because of its incredible nutritious properties, most notably the food’s high protein and fiber content.  Because quinoa is not actually a grain, it is gluten-free – suitable for those with Celiac disease or similar gluten intolerances.

Bohl Pazos is currently on the faculty of the Pontifical Catholic University of Peru. He earned his bachelor’s in geography there, and also studied at Antonio Ruiz de Montoya University.  He earned a master’s degree in geographic information systems and remote sensing from Cambridge University, and currently a doctoral student in urban and regional planning at the University of Zaragoza in Spain.

Bohl Pazos was not available for an interview. His talk is sponsored by the Center for American and World Cultures at Miami University.

“Our vision is to expand our students’ intellectual and personal horizons and encourage them to learn more about peoples, cultures, and issues with which they are unfamiliar,” says Mary Jane Berman, director of the Center for American and World Cultures.

“One of our goals is to demonstrate how globally interconnected we are with people outside our national boundaries,” Berman explains.

Once termed as the “poor-man’s-food,” quinoa is now being incorporated into restaurants, supermarkets and campus dining halls across the globe.  Jon Brubacher, Miami’s food purchasing director, estimated the dining halls at Miami serve 10 times more quinoa per year than five years ago.

Brubacher adds, “Today, we serve quinoa dishes three times a week on our Pastato line, we have a wonderful quinoa burger now available five days a week at Encounter in Maplestreet (Station), and it is also served at One Eight 09 in various dishes.”

He mentions that Housing and Dining staff are already exploring quinoa-inspired dishes to be served at the new Western Dining Commons and elsewhere on campus.

For off-campus students, quinoa is available at Kroger and its neighboring grocery, Moon Co-op, which has a few varieties of quinoa available in its bulk section.

For more information regarding the lecture and/or competition, please visit the Center for American and World Cultures Facebook page for this event.