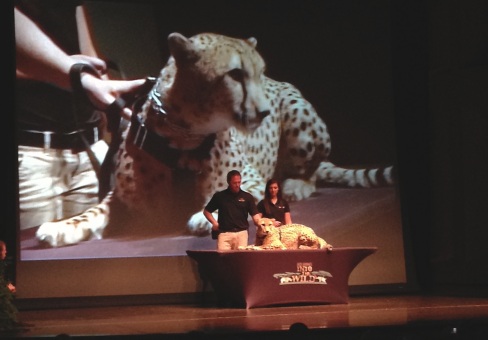 It’s not everyday students of Miami University get to see a beautiful and exotic macaw parrot poop on the stage of Hall Auditorium. It’s also not everyday university students get up close and personal with a full grown cheetah who could easily pass a car travelling 55 mph down I-73 toward the university.

These were just two of 11 animals 66-year-old zookeeper and animal conservationist Jack Hanna introduced his 750-person audience to at Hall Auditorium Monday night at 8 p.m. in his lecture titled, How We Can Better Share Our Planet with the Creatures Around Us.

In an interview a week leading up to his lecture, Hanna explained that the number one threat he sees to animal conservation is not global warming nor pollution, but overpopulation.

“The animals have to learn to live with us, which is what they are doing now,” Hanna said during the interview. “Animals are adapting to our environment quicker and quicker everyday. Those who can’t, go by the wayside.”

Rather than spend an hour giving a serious, depressing lecture about the challenges animals have to overcome in order to survive, he took a more entertaining approach to illustrate why people should care about animal conservation, personally introducing his audience to some of the planet’s most magnificent and endangered species.

“Even though you can see this on my TV series, or you can see it in a book or whatever, it’s not like seeing this up close,” Hanna said in a press conference before his lecture as a six-month old snow leopard rolled around at his feet. “Now, when you hear about a snow leopard, you can say, ‘you know something, I sat there and saw a snow leopard. Let’s try and work on this, let’s try to save the snow leopard.’

That’s what I want when people leave here tonight, I want them to be educated, but also have a good time and then leave wanting to help. That’s all my show is about.”

Even before Hanna stepped out on stage, the audience learned tidbits of information about animals from an interactive slideshow playing on stage. People of all ages at the show saw photos of Hanna’s adventures abroad, and learned fun facts like how a moose can give an Olympic sprinter a run for his money, reaching up to 35 mph.

If the slideshow didn’t catch the audience’s attention, Hanna’s show certainly did.

During his presentation, the Columbus Zoo’s Director Emeritus played several videos of his past adventures studying mountain gorillas in Rwanda and black bears, and showed off 11 animals from the Columbus Zoo, including four species of cat, two types of bird, a fox, sloth, otter, albino python and a penguin.

The entertainment came from both watching the animals and listening to some of Hanna’s own animal humor.

As he showed the audience a 12-foot albino python, he explained how a 19-foot python had once bitten him, and he had to wait 35 minutes for the python to let go since the snake’s jaw freezes after biting down on something.

“So if you do go to the Amazon and it turns out you get bit, sit there for maybe 25 minutes,” Hanna said. “If you have a cell phone, give Jack a call.”

Junior zoology major Jennifer Kennedy grew up watching Hanna as a child, and enjoyed seeing and hearing about all the different animals the zookeeper has worked with.

“I thought it was a great show,” Kennedy said. “I always like seeing all the animals. I know he brought in a lot of cats, and I don’t think a lot of people get to see those.”

The first cat Hanna brought to the stage was the snow leopard with its four-foot long tail, overgrown paws and black and white coat Hanna described as feeling like silk. As the sixth-month-old leopard explored the stage, Hanna explained that this Himalayan cat is endangered.

“Look at it closely, because right now everyone, in the wild this species is having a rough time,” Hanna said. “They say there might be 800, I’ve heard 500, but I bet you there aren’t more than 300 left in the world.”

The entertainment and education continued as Hanna brought out three more cats, an Asian small clawed river otter that is extinct in the wild, and a penguin who seemed to amuse himself as he watched himself on screen with the rest of the audience.

Before concluding his presentation, Hanna showed one final video of bloopers he has accumulated over the years from his shows, illustrating his passion and love for animals and his career.

“Bloopers were definitely a plus,” Warren said. “And just to see him progress and talk about his lifelong dream of being a zookeeper and displaying that now at this point in his life.”

Hanna started his career working at a small zoo in Sanford, Florida in 1973, and was named director of the Columbus Zoo in 1978. Hanna’s hard work and dedication has helped make the Columbus Zoo the No. 1 zoo in the country the past two years by USA Today Travel Guide.

“I don’t like the word celebrity, I don’t use that word,” Hanna said. “I guess I’m an ambassador to the animal world.” 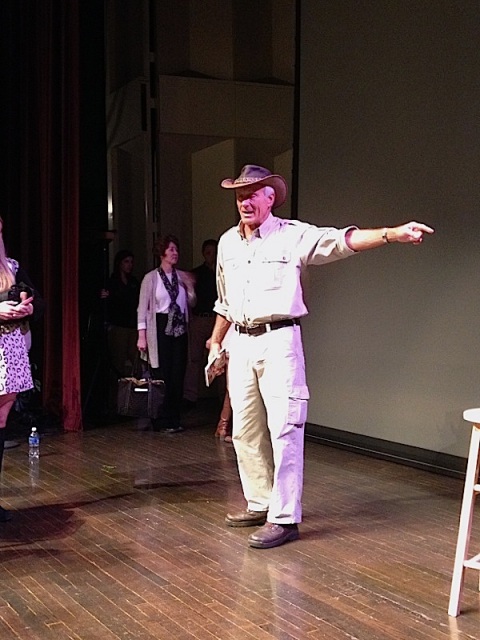 Story and photos by: Melissa Maykut