The Western Dining Commons offers more to the Miami University community than tasty, healthy meals. Behind the design of the newest dining hall on campus, is a feat nearly unheard of in the business: LEED silver certification.

LEED – Leadership in Energy and Environmental Design – is a certificate program that recognizes excellence in sustainable design. According to the U.S. Green Building Council,  LEED consists of four levels of certification based on a point system that awards for the number and type of sustainable features incorporated in the building. Silver is the second level and a building must earn 50-59 points out of a possible (but rare) 100.

Silver certification, according to Nancy Heidtman, senior director for culinary support services, is unfathomable in the dining industry.

In following the university’s Sustainable Commitments and Goals, silver LEED certification is the goal for all new construction on Miami’s campus, Yvette Kline, director of sustainability and energy conservation and a LEED Accredited Professional, said.

The Farmer School of Business was the first of Miami’s buildings to receive LEED certification in 2009 and since then Miami has built MapleStreet Station, the three Western residence halls and renovated MacFarland Hall and Anderson Hall to meet silver LEED criteria.

The dining commons, the latest of Miami’s sustainable buildings, is riddled with environment-conscious features from the time students enter to the time their trash is properly sorted and disposed by trained staff.

Much of the food can be put into one of the dehydrators, an impressive feature, according to Kline.

“By the time the material comes out of the dehydrator, it’s light-weight, it’s easy to transfer to our compost dumpster that’s behind the building and that really cuts down on the amount of waste and the amount of water and odor that are associated with the kinds of waste that would come from a dining hall,” Kline said.

Heidtman said it has the capacity to reduce 200 pounds of food waste to 20 pounds.

The reduced food scrap can be used as mulch or composted, and although the stench is rank, the dehydrator decreases food waste by 10 percent.

The building is filled with appliances, such as the ovens, that, according to Mary Barrera, manager of culinary support services, heat more quickly and use less energy in the process.

Along with the appliances, the hoods at the food service islands automatically adjust the amount of exhaust depending on the amount of heat generated during cooking, according to Connie McCarthy, senior project architect. This drastically reduces energy usage.

The building is heated and cooled by the new geothermal power plants, but ample windows and a “green” roof help regulate temperature as well.

The roof was designed to lighten the cooling load of the HVAC and to assist with storm water runoff. Ritter Hoy, media relations representative and staff writer, explained the chains hanging from the roof of Western Dining Commons allow rain water to flow into a specially designed rocky gutter that drains into the pond behind the building. This, according to McCarthy, is known as a rain garden.

The windows allow for what is termed “daylight harvesting”. During the day, the lights are dim, allowing natural light to illuminate the building. 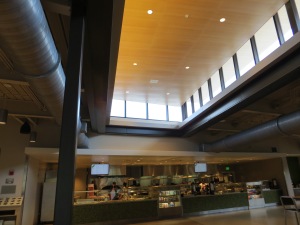 “The lighting increases as it gets darker outside, which really saves on energy,” Andrea said.

The lights – LED bulbs throughout – have occupancy sensors to control the amount of lighting in comparison to the amount of people, according to McCarthy.

“The design of the building is really where most of the sustainability lies,” Heidtman said. But the Culinary Support Center has dedicated itself to meeting President Hodge’s sustainability goals in a number of other ways.

The department purchases 25 percent of its products locally and offers organic products in most of the dining halls and market operations. It also partners with local food banks and donates products to these operations that help to feed those in need.

Barrera said, “Those weekly menus, having the same thing five days in a row, helps [chefs] with their planning and not having to guess exactly what they’re going to make for one day… By Friday they’re pretty much rock stars with what they need to prepare.”

The à la carte aspect of most dining locations adds to the reduction of food waste.

The shift towards sustainability coincides with an increased interest from faculty, staff and students to reduce the overall carbon footprint of the university. The university’s Sustainability Committee reported that Miami’s Oxford campus is responsible for the emission of 137,000 metric tons of carbon dioxide annually.