The Keys to Keystone XL

Have you ever stopped to think about just how much of our lives depend on petroleum and petroleum products?

Everything from the car or bus you used to get to campus, to the food delivery truck that delivered the energy bar you ate as you walked to class. Even the cargo ship that helped a banana end up on your breakfast table used a form of petroleum!

Long story short, the world runs on petroleum, which means the world needs more sources of it, as the more easily accessible reserves dwindle daily.

Out of this need, the Keystone Pipeline was created. 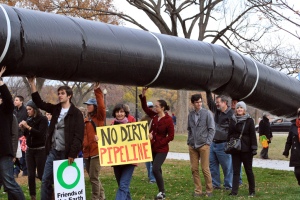 The Keystone system is the creation of the Canadian company TransCanada and was first purposed in 2005. The whole rationale of the system is to transport petroleum from the oil sands (also called bitumen) from western Canada’s boreal forests to refineries that make gasoline, aviation fuel and diesels, located on the Gulf coast of the United States.

Part of the Keystone system has already been constructed through Alberta Canada, North and South Dakota and Nebraska. The proposed Keystone XL pipeline is a “short cut” to the Gulf that would run through Alberta, Montana, South Dakota and Nebraska, where it will meet up with a preexisting pipeline that would then take it to the Gulf refineries – a much more direct route than the existing system.

Currently the proposed pipeline is just that, proposed. Congress is currently debating whether or not to allow the pipeline to come into fruition.

Opponents of the pipeline say it is a big risk. A big concern is that it might leak, which could cause an environmental nightmare.

Lawmakers also debate about the source of the petroleum, the oil sands themselves. Because of the thick tar-like sand and clay mixture that the petroleum is found in, it takes less-than- environmentally-friendly ways to actually extract and transport it. Mining destroys the immediate environment and turning the oil sands into a usable product produces about 17 percent more carbon emissions than producing oil a more conventional way!

Proponents of the pipeline say it will produce temporary and permanent jobs for America, as well as help lower the cost of fuel.

The pipeline will also help decrease the need for America to import oils from the Persian Gulf, Venezuela and other oil exporting nations, meaning more fuel security in the future. Just merely building the pipeline is estimated to bring in about $3.4 billion dollars to the United States economy.

Our daily lives are shaped by petroleum and this pipeline will produce far ranging consequences for the future of petroleum in America, whether it’s constructed or not.

The next time you fill up your car, or get on a bus, or eat a banana, be aware of the part  petroleum and the Keystone system had in making our daily lives a reality.

Need advice for keeping your indoor plants alive? Staff Writer Allison Reineck has you covered.
“She had big dreams to inspire change in the world, and Marlene feels these gardens are a great reminder of her love and aspirations.”
“Antibiotics are given to animals to rapidly increase their growth, at an unnatural, unhealthy rate. “