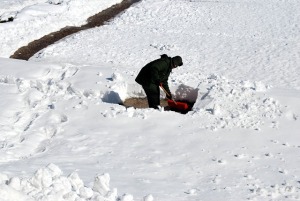 Anyone who has lived in the Midwest knows when winter rolls around, life tends to take a turn for the unpleasant. Freezing temperatures, dreary days with little sunshine, and the ever-inconvenient snow piling up on roads and cars and making the morning commute – or anyone commute – just that much more difficult.

Not only is winter a rough time for humans, it’s also the season with the most environmental drawbacks. Notice your electricity and gas bill rising from December through March? That’s the first, and most obvious, difficulty with reducing our carbon footprint during the winter. We like to be warm. We like hot water and space heaters and switching on our electric fireplaces. We don’t like the bills that follow, and the earth definitely doesn’t appreciate the extra Carbon Dioxide emissions. In fact, according to an article in the Huffington Post by environmental writer Lauren DeMates, heating and cooling contribute to almost half of all residential energy expenditure.

In order to mitigate the freezing temperature-increased heating bill complex, it’s necessary to turn the temperature dial down and thrown on an extra sweater and a blanket. You might also look into window-sealing treatments which could help with cold blasts in drafty homes. Invest in some heavy curtains, too. All of these should help you stay a little warmer while keeping the costs (both financially and environmentally) down.

You might want to skip a warm bubble bath and opt for a shorter shower. It’s tempting to turn the water temperature all the way up, but water heaters are another main source of energy usage. As far as dishes go, try using cooler water and less of it in order to reduce the hot water expenditure. No one’s leaving their house to come visit you anyways, so only do the dishes when a large amount have accumulated.

Winter conditions are hard on roads. Plow trucks rip up cement and salt covers the ground. Unfortunately, according to Slate.com, 70 percent of the salt applied to roads stays in the area’s watershed. A.K.A. your drinking water might get  a little bit saltier. This is a health-issue for those on low sodium diets, but only a taste-issue for everyone else. The real problem comes from the soil erosion caused by salt, which can damage trees and vegetation as far as 650 feet away.

We can’t necessarily do too much to stop the salting run-off problem, but researchers are looking into it. For now, its necessary to take a few extra steps to reduce our own snow footprints during the dreadful winter months.

There was an error retrieving images from Instagram. An attempt will be remade in a few minutes.