There’s a new club that has added its name to the ever growing list of organizations here on Miami’s campus; the Renewable Energy Club. The club was founded at the beginning of the spring 2016 semester and was created out of interest in a topic, renewable energy.

“Right now, there’s a consistent group of 15-20 that show up to all of the meetings, but we’re growing every day,” said Lowell Bieber in regard to membership. Although some of the issues are discussed in engineering and energy classes, the Renewable Energy Club is open to all students that have the desire to learn more about renewable energy.

Bieber, junior, is a mechanical engineering major with an energy co-major and is currently serving at the club’s Outreach Chair.

“Right now, there’s a consistent group of 15-20 that show up to all of the meetings, but we’re growing every day,” said Bieber in regard to membership. Although some of the issues are discussed in engineering and energy classes, the Renewable Energy Club is open to all students that have the desire to learn more about renewable energy.

The purpose of the organization is straightforward- “We want to give members experience with working with renewables and also give them exposure to topics in renewable energy,” explained Lowell.

Mark Scott, Assistant Professor in the Department of Electrical and Computer Engineering, serves as the club’s advisor. He is currently working on an interdepartmental project related to solar energy, which is one of several topics the new club has discussed in meetings this semester. When they aren’t discussing topics, the club goes hands on and dives into projects.

“We’re taking it a semester at a time and focus[ing] on a new project each semester. Right now, we’re focused on Piezoelectric, a material which once it’s deformed creates a small amount of electricity.”

This project, which will create energy from students stepping on it to light up an LED light, will eventually be placed in Benton to raise awareness for both renewable energy and the Renewable Energy Club. Future ideas will be member generated and decided on during club meetings.

According to Bieber, there are some great problems roadblocking the transition to renewable energy.

“Infrastructure is one of the biggest issues. In order to transition to renewables, you have to have this infrastructure that doesn’t exist currently. I think for anything major to happen, there has to be a major push away from fossil fuel infrastructure and towards renewable energy.”

Another important club aspect is outreach to nonmembers. The club wants to spread awareness of renewable energy on campus, but they also want to extend their reach into the surrounding Oxford area.

“We’d like to go to local schools to teach younger students about renewable energy and give them a chance to interact with projects that we create. Additionally, we’d like to take trips to local renewable facilities and open that to nonmembers. Being able to visit those sites, such as a local wind farm or a local solar farm, would be beneficial for members and nonmembers,” said Bieber, reiterating that the club is just getting started and they will always be looking for new opportunities to spread their message and their work in the future.

The Renewable Energy Club was created to design and create solutions for all sorts of issues in the field. They are open to new ideas and members, so feel free to check them out. 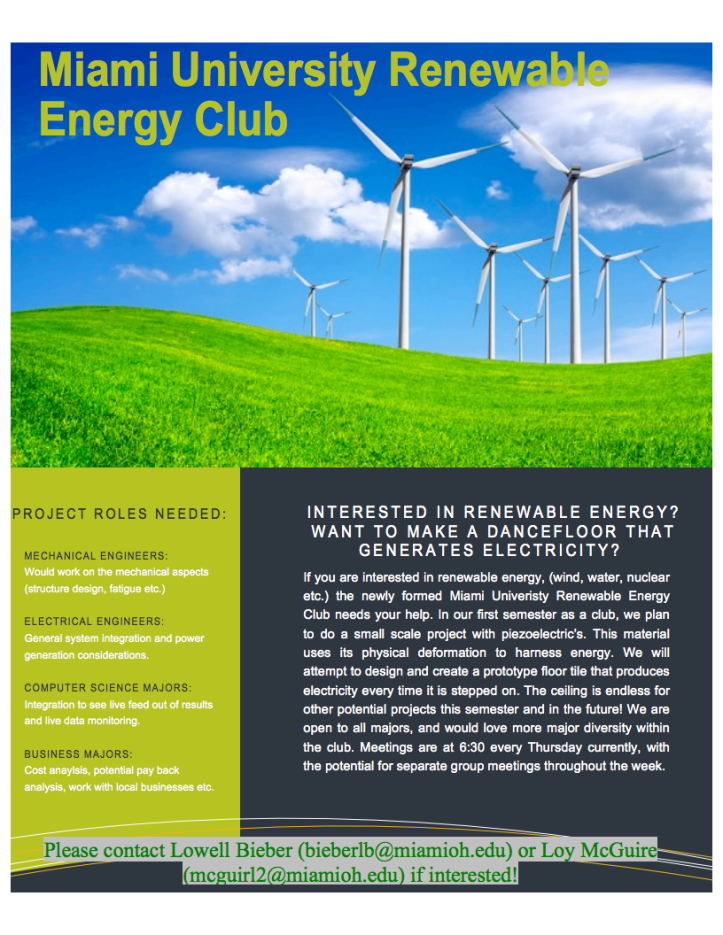 Have you heard of Talawanda Oxford Pantry and Social Services (TOPSS)?
“5G networks and data centers are not focusing on sustainability. While some steps are being taken with the environment in mind, we still need to hold these industries accountable.”
Earth Week “represents a collective effort to teach others about living a sustainable lifestyle and making a conscious effort to conserve our environment.”