Lessons from Study Abroad in Bhutan: Connecting Conservation and Culture

What comes to your mind when you think of nature? A dense forest? A serene lake amidst a picturesque mountain range? Walden Pond?

The Western conception of nature as pristine and untouched by humans is highly influential throughout American history. From the genocide of Native Americans to transcendental writers like Thoreau and Emerson to modern conservation policy and practice, this narrow view of nature has not only been far from the truth, but has led to the diminishment of sustainable coexistence between humans and our environment.

In reality, humans have lived within nature for our entire existence as a species. Through centuries of practice, humans learned to create tools, grow and harvest food and make homes while working with our environment.

The Western idea that humans are separate from nature due to our intelligence and civilization is both based in a colonialist worldview and immensely detrimental to our potential for sustainability.

If we view ourselves as detached from the environment that surrounds us, how can we seriously reflect upon and improve the ways in which we are constantly impacting our environment?

This summer, thanks to aid from the Benjamin A. Gilman Scholarship, I had the incredible opportunity to study abroad with the School for Field Studies in Bhutan for six weeks. Bhutan is a small landlocked nation in the Himalayas, bordering both India and China, which prides itself on its strict environmental policy and related biodiversity and conservation. Bhutan has a constitutional monarchy, with mandates such as maintaining 70 percent of forest cover written into its constitution, and a national religion of Mahayana Buddhism. 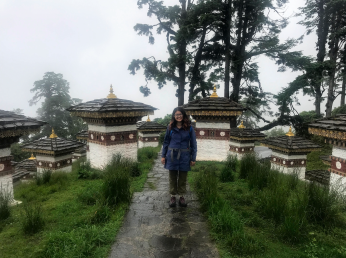 Here are some photos of me in Bhutan, amidst memorial chortens at Dochula Pass, then with the large golden Buddha and with some friends in my study abroad group.

Though the constitution was written only ten years ago, conservation has played a significant role in Bhutan’s history for centuries. However, conservation has been both defined and practiced differently from the traditional Western notion of conservation.

Prior to the spread of Buddhism throughout the country in the 8th century A.D., most Bhutanese feared nature as a domain of powerful evil. Guru Rinpoche is accredited with spreading the teachings of Buddhism in Bhutan and subduing the wild, uncontrollable forces of nature through spiritual practice.

Today, many natural sites, such as the location of this painted rock, are deemed sacred, spiritual places. The conservation and protection of these spaces, referred to as beyul and ney, is part of Buddhist beliefs.

Further, Bhutan has a rising number of community-based forests, where local community members are able to harvest limited amounts of natural resources such as firewood for their personal use. As one Bhutanese community leader explained to me, this allows for communities to feel connected to and responsible for their local environment. Members of the community will hold both others and themselves more accountable, because they all depend on these resources. 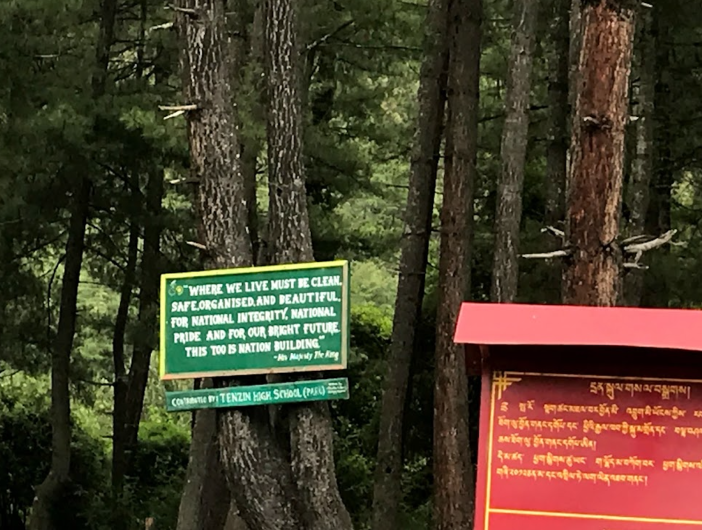 During the program, we were able to visit one of Bhutan’s largest national parks, Jigme Dorji. Over 6,000 people live within the park, and part of the park officers’ jobs are managing human-wildlife conflict and natural resources. This is in stark contrast to the United States’ national parks, which have historically played an enormous role in the ethnic cleansing of indigenous peoples.

However, this is not to say that the cohabitation of humans and wildlife in Jigme Dorji National Park does not present its own issues. The elevation varies in the park considerably, with mountains from 1,500 meters to 6,000 meters above sea level. The vastness of the park and mountainous geography creates additional difficulties in enforcing natural resource limits set by the park, preventing and prosecuting poachers and managing non-biodegradable waste such as plastic.

Educational anti-poaching and natural resource posters, as well as fines for those who do break rules in the park, have been instrumental in increasing regulation awareness of park residents and tourists from China and Tibet.

Since Bhutan has opened up to tourism and global development in the past few decades, the country has entered a new era of natural resource management. Starting with the enactment of the Forest Policy of 1974, conservation in Bhutan has become highly scientific and secular, with special attention given to forest conservation, afforestation, wildlife conservation and resource surveys. This Western-influenced approach frequently dismisses Buddhist and traditional beliefs as superstitious.

While there may be many benefits to scientific conservation, it is essential to recognize the cultural and spiritual components of conservation as well. Without the Bhutanese fear and later believed Buddhist sacredness of nature, much of Bhutan’s prized biodiversity and forest cover may very well not exist today.

Conservation is rarely as black-and-white as it is often seen. There are countless complexities and dynamics at play within each unique cultural, geographical and spiritual context. From my experiences in Bhutan, the importance of considering context when building an approach to conservation has never been clearer to me. There might not be just one correct way to do the challenging work of conservation most effectively across the globe. However, just as biodiversity strengthens an ecosystem, might diversity in conservation strategy strengthen our chances in balancing human needs with finite natural resources?

I highly recommend studying abroad to broaden your perspectives on environmental issues, culture and the world at large. Learn more about Study Abroad at Miami University by visiting the Study Abroad office, read about the Gilman Scholarship here and check out the School for Field Studies here.