Street sign at the top of Western College Drive

Peabody Hall is considered by many as the most recognizable anchor of Western campus. When Miami students think of Peabody, their initial thoughts are most likely Helen Peabody, the famed ghost of Western Campus, the long walk to the dormitory and uniqueness of the social and natural environment surrounding Peabody Hall. Western Campus has a long-standing history of being a liberal and “safe space” for many patrons as it once served as a liberal arts college for women in 1853, a training site for civil rights activists in 1964 and currently the home of the Western Program. Peabody Hall is the heart of Miami’s Western Program, which is a specialized program that allows students to engage in individualized, creative studies specific to a student’s interests and goal. As a former resident of the famed dormitory and member of its environmental living learning community, I believe that my increased exposure to the natural areas of Western Campus during the early, formative years of my college career helped guide me to where I am today.

In McKay Jenkins’ essay Nature, he argues that nature is constantly around us, but it is up to humans to determine whether we allow ourselves to notice our surroundings. As I recall my two years of living on Western Campus, my mind immediately goes to enchanting memories of walking home from class on a cool autumn afternoon. I remember walking across the stone bridges overlooking the glistening ponds, bright rays of sun warming my skin, crisp fall breeze grazing my cheeks and the crunch of fallen leaves beneath my feet. To many, that long walk home was merely an inconvenience adding to the stress of their school day, but I saw it as a much-needed reprieve from the hustle and bustle college life. 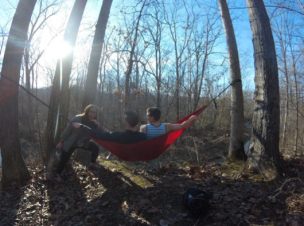 I had found nature in my everyday life. I had taken to doing my homework outside on the hill behind Kumler Chapel or on the hidden stone sitting areas surrounding the pond. In my free time, I would sit in hammocks with friends or hike in the Miami Natural areas trails, which feature 17+ miles of hiking trails across 1000 acres of varying habitat. I even changed my major from engineering to Environmental Science because I felt that I would find happiness studying a subject I was passionate about. I joined more environmentally-focused student organizations, leading meme to some of the most impactful experiences in my life such as my first backpacking trip or discovering the impact of invasive species removal.

My previous experiences on Western campus enabled me to see the nature that Jenkins encouraged others to notice and allowed me to notice the fragile relationship between humans and nature. Those seemingly small interactions with nature had gone unnoticed until I moved off-campus and found it difficult to connect with nature. I was no longer walking across streams and hills but through streets of fallen trash cans and broken glass. I realized the nature that surrounded me for two years of my college career is often taken for granted. Yes, there was still the crunch of leaves on an autumn day, but it was coupled with the sound of a red cup or aluminum can beneath it.

My time living on Western campus allowed me to have a more observant and open point of view in relation to the interactions between nature and society. I was able to make the connection that nature will always surround us; it is simply our outlook and actions that decide how it is viewed. As I finish my final semester at Miami University, I am grateful to have experienced my environment in such an impactful way that it guided me to a career path that has given me purpose and belonging. In the future, I hope to continue my relationship with nature in my profession as well as through my actions.