On Saturday, Nov. 9, the oldest green organization on campus, Green Oxford, made a great leap for all green organizations into the uptown Oxford bars. Green Oxford hosted an event called BEAT the WASTE at Brick Street Bar and Grill’s famous Beat daytime hours. Although Beat is known for its weekend deals on beer pitchers, there are plenty of people who buy other drinks in cans or Whiteclaws. Green Oxford’s aim was to get those cans and glass bottles into the recycling bin. They set up right by the bar and tried to get as many people as they could to recycle. 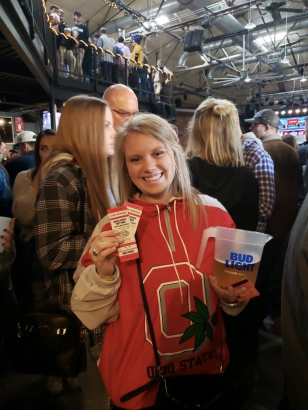 For every one can or bottle recycled, a recycler was entered into a raffle to win either Brick Street merchandise or Fast-Pass tickets! Recyclers could enter their name for as many cans they put in the recycling bins. Overall, it was a great success, with almost 50 cans recycled in just 2 hours! To the right is the winner of Fast Passes: a happy recycler! Below is a screen shot from Brick Street’s Instagram. Green Oxford hopes to make this an annual event and convince the bars of the importance of recycling! 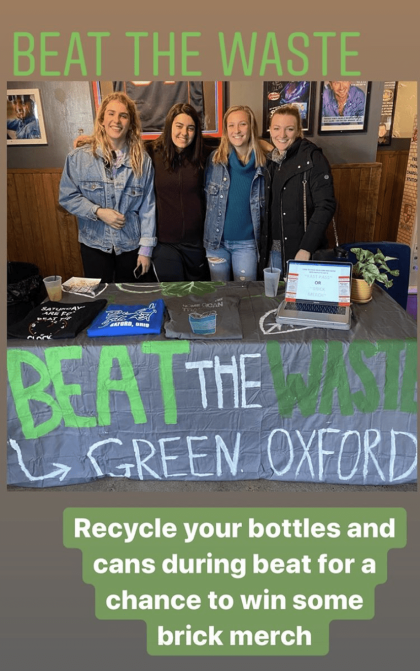 Earlier this semester, Green Oxford also held a tabling event during Sustainability Week called Local Foods Taste Test. It was an event where they bought local, organic fruits and vegetables from the Moon Co-Op and compared them to non-organic fruits and vegetables bought from Kroger in Oxford. There is a very clear difference in size and taste between the two types of fruits and vegetables. For students, it is eye-opening to students to see this difference, and it can help people realize that they may want to start shopping locally instead of at Kroger! The event was also a great way to grab a snack of hummus & carrots or apples in between classes.

Green Oxford has also been working on a multitude of service events in the local community, but one that made the largest mark on was volunteering at Hueston Woods. Members worked to remove brush from a large Indian Burial Mound made in 500 B.C., one of the few remaining in the area. Volunteers worked hard moving large sticks and other brush off of the mound so that it could be restored to how it once was supposed to be, with native grasses growing on top. While working on brush removal, members got to know the leader of the volunteers, Nancy Feakes. She talked about Indian Burial Mounds, but also about Hueston Woods in general. Feakes mentioned how the park cannot afford to have recycling cans or pay for services to pick it up in the park. This really hit home to members in Green Oxford. Can you believe it? This major state park that attracts thousands of people a year doesn’t have the means to recycle! It was time for Green Oxford to help.

Looking ahead, Green Oxford is partnering with a fellow art student at Miami, Natalie Fabbri, to make reusable bags with a design featuring native Ohio plants! They will be ready for purchase during the week before finals and would make amazing Christmas presents. The proceeds will go towards getting recycling bins and services for the very popular camping sites at Hueston Woods. Keep your eyes open when walking in Armstrong for these cute, green bags!

Green Oxford is always welcoming new members, and if you think you would be interested in some of their community service events or tabling events, feel free to reach out. They love handing out executive leadership positions and still need to fill some spots for next year! Green Oxford meets on Wednesdays at 6 pm in 109 Harrison Hall. If you want to be added to the GroupMe or email chain for the club, add Green Oxford on the Hub, or email Sarah Hale at halesn@miamioh.edu.

All photos courtesy of Allison Forsythe