If you’ve walked around campus at all since we’ve returned back from J-Term, you may have seen some posters, A-frames and even a zero-emissions golf cart advertising Recyclemania. Most of these posters have phrases on them like “Beat Ohio University!”, which is a message that I’m sure we can all get behind. But what exactly is Recyclemania?

I had the opportunity to speak with Miami’s Director of Sustainability, Dr. Adam Sizemore, and graduate student Cecil Okotah, the leaders behind this event, to find out more. In the words of Dr. Sizemore, “Recyclemania is a competition between higher education institutions throughout the United States, as well as Canada. As the name suggests, it’s a competition to promote recycling; it’s not just an event, but an organization as well.”

Recyclemania actually originated on Miami’s campus twenty years ago. The first Recyclemania had only two participating schools, Miami and Ohio University, and was based on calculating the total amount of recycling per capita based on weight. For the 20th anniversary, we are once again bringing back that vivid rivalry with OU in order to promote a more fierce competition. We are still competing against all of the other participating institutions, spanning over 43 states, 3 territories, and Canada, but our totals will be pulled out alongside OU’s to see who the true recycling champions are.

The main Recyclemania event actually has ten to fifteen subcategories of competitions; however, Miami is only participating in four of these contests. The per capita classic is the one we are all participating in, whether we know it or not. Rumpke, our waste management company, weighs all of our recyclable material, and those totals are then compared to other universities. When I talked to Dr. Sizemore back on Feb. 10th, our weekly total was 37,480 pounds of recycled material for that week. Dr. Sizemore had estimated a 50,000 pound weekly total from weighing the material from individual dumpsters.

The second event that Miami’s campus is participating in throughout the next few weeks is the Race to Zero Waste, which pits four residence halls (Scott, Hamilton, Minnich, and Richard) against each other to see which hall can create the least amount of waste. The winning hall will receive bragging rights and some sort of incentive at the end of the competition.

As a school, we are also participating in electronic recycling, though it is not being advertised much around campus. This contest is the collection of laptops, computers, iPads, tablets and other electronics over the course of 30 days. Most of these collections are done through academic departments and Miami IT, however, so this content is considered to be more of a staff-based competition.

Last but not least, on March 6th, Recyclemania has teamed up with Miami Basketball for a zero-waste game day event! Miami will be playing Ohio University at Millett Hall at 7 p.m. There will also be food and environmental organization tabling. President Greg and Renate Crawford will be making a special halftime appearance, too, so be sure not to miss this event!

There’s a lot that you can do to participate and help us beat OU in the war of recycling in both the per capita competition and the basketball game. Every Tuesday from 11 a.m. to 1 p.m., Recyclemania has a table in the Armstrong Student Center where you can learn about what is recyclable and what isn’t. Dr. Sizemore and Cecil took me through the activity, and I was shocked by some of the things that I’ve been recycling that Rumpke cannot process, like Starbucks cups. 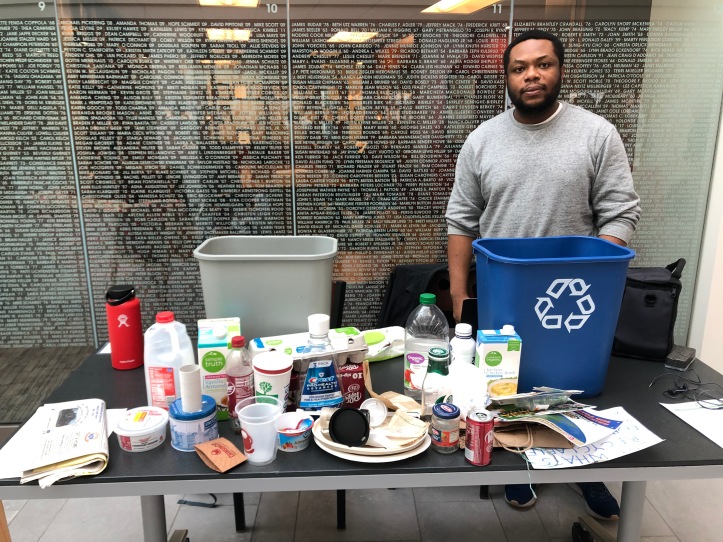 As we wrapped up our conversation, Dr. Sizemore took me to see the competition’s official golf cart. Though I unfortunately wasn’t able to hitch a ride, the cart is definitely a great piece of advertising during class changes to catch the eye of students walking through campus. Though the main goal of this event is to get the word out and to promote recycling across campus, we can also aim to recycle more for the Earth’s benefit, and what’s better than taking OU down? 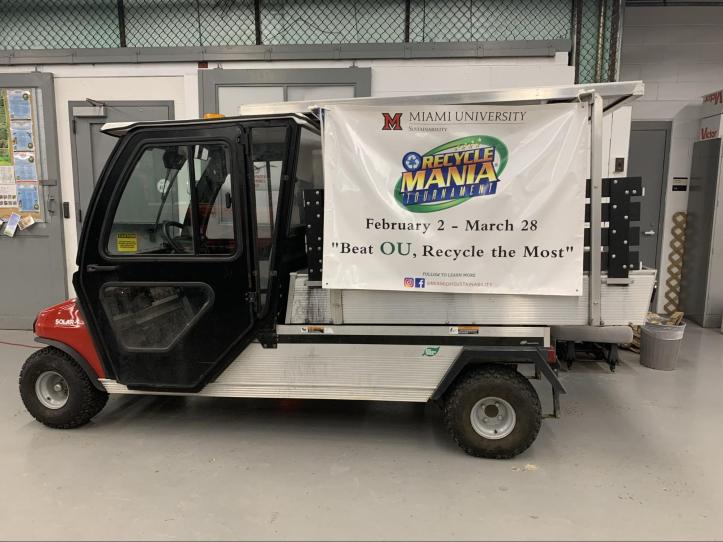